Web 2.0? Web3? How about somewhere in between? “I think we will wind up [with] web 2.7, where there is some centralization, keeping people safe, but the ability to port your assets with you to any site,” cringecore crypto advocate Randi Zuckerberg said at the Global Supertrends conference. The elder Zuckerberg actually makes some good points about the lack of usability in metaverse wallets that her younger brother might want to keep in mind as he tries to turn Meta Pay into something more than a button you press to buy used bookshelves on Facebook Marketplace.

While Ripple’s been busy battling the SEC, the crypto giant also found itself brawling online with a longtime nemesis. Ethereum co-founder Vitalik Buterin and Ripple chief technology officer David Schwartz launched into a heated tit-for-tat on crypto Twitter this week. The dispute got so heated because it centered on key issues in crypto: Which tokens are legit and which ones aren’t? Which companies deserve the crypto world’s support and which should be shunned?

This is an old feud. It began when Buterin endorsed a snarky Twitter post against XRP, the token Ripple uses in payments, by arguing that Ripple “lost their right to protection when they tried to throw us under the bus.”

The debate highlights one of crypto’s most important rivalries, even though the relevance of some arguments have faded.

Ripple’s legal battle with the SEC, which keys on whether crypto tokens are securities, could have far-reaching consequences for the entire industry, including Ethereum. Crypto may be fast-growing and fast-moving, but some of the players have been at this for a while, and their rivalries can be long-lasting. This week’s Twitter tussle between Schwartz and Buterin put these simmering divisions on display.

DataRobot’s AI Cloud for Financial Services Unlocks the Art of the Possible: DataRobot continues to attract clients in financial services who want to de-risk their AI investments and rapidly scale AI to almost every part of their operations, resulting in improved productivity and higher customer satisfaction.

Is Apple Pay everywhere now? The debate is playing out in the media. The Wall Street Journal says Apple’s digital wallet is heading toward ubiquity, counting the percentage of iPhone users and retailers who are ready to use it. But Pymnts says the tech giant is still only facilitating a small percentage of transactions.

Victims of the crypto crash are fighting to get their funds back. A group of people locked out of their accounts by the bankrupt Celsius organized a group chat and raised $100,000 to hire a lawyer to fight for them in bankruptcy court.

Bill.com’s share price got a boost from earnings. Wall Street investors liked that the firm more than doubled revenue year-over-year to $200 million and is projecting further growth next quarter.

Crypto.com is quietly laying more employees off. The crypto exchange had fired hundreds more employees since announcing it cut about 260 jobs in June, according to The Verge.

Tether has a new accountant. The issuer of the world’s largest stablecoin switched the accounting firm that signs off on its attestation reports to BDO Italia. Tether is still yet to provide the full audit of its reserves it promised five years ago.

Crypto traders’ data bills are going up. Price movements for equities and crypto have become linked to the point that digital asset hedge funds must consider shelling out for expensive data from stock exchanges and other traditional markets, lest they trade in the dark.

CFTC Commissioner Kristin Johnson is sounding off on the crypto regulation debate. “It benefits market participants to know who their regulator is,” she told CoinDesk.

Real-time payments might not need a digital dollar, according to a top Fed official, since the forthcoming FedNow system could address those needs. “My expectation is that FedNow addresses the issues that some have raised about the need for a CBDC,” Federal Reserve Governor Michelle Bowman said at the VenCent Fintech Conference this week.

The dramatic fall in crypto prices has led to a drop in criminal activity involving cryptocurrencies. Well, except in one area. Hackers have been raking in more revenue by attacking vulnerable DeFi protocols and network bridges. Nearly $2 billion worth of cryptocurrency have been stolen as of July, compared to just $1.2 billion in the same period last year, according to Chainalysis. The hacks include the $190 million stolen from the Nomad bridge. 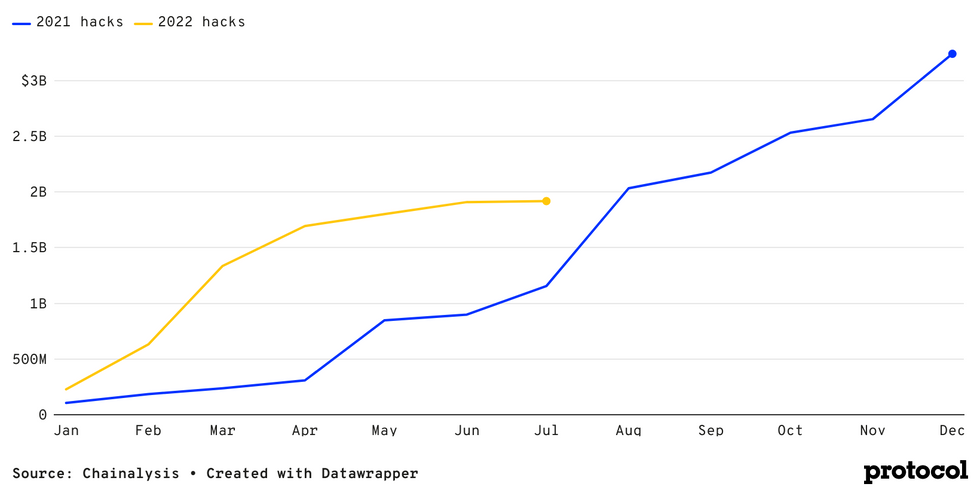 DataRobot’s AI Cloud for Financial Services Unlocks the Art of the Possible: Banks need to secure a competitive advantage in an increasingly tight race to harness best-in-breed technology. Decision makers need to not just plan a future-ready strategy, but also recognize the value of AI that could boost not just their performance in-house but also their reputation among their global customers.

Thanks for reading — see you Monday!

1,300 Bitcoin Was Just Transferred From Coinbase To Binance

1,300 Bitcoin Was Just Transferred From Coinbase To Binance