This is an implementation of nChain’s solution¹.

Tokens on Bitcoin are typically stored in UTXOs. When a supposed token transaction is received, a user needs a way to efficiently and quickly check its authenticity. A major part is to decide if it links to certain genesis transaction, where the token is issued.

In a basic form, the Back-to-Genesis (B2G) problem boils down to: given a transaction, is it linked to certain genesis transaction in an unbroken chain of transactions?

All tokens on Bitcoin today have to rely on some trusted third-party to address the problem, since it becomes computationally challenging for a light-weight user to verify himself when the chain is excessively long². For instance, DotWallet’s Badge tokens use a token indexer and Sensible tokens use an oracle. This third-party reliance hurdles token adoption on Bitcoin, since it is not as scalable and SPV-friendly as native bitcoins.

Our previous proposal attempts to solve the problem without any third party. However, the size of a token transaction grows exponentially when the chain grows, severely limiting its usage in practice.

In each step, zᵢ is the public input and wᵢ the private input (i.e., witness).

Each step produces a new proof. In step i, the prover algorithm computes 𝛑ᵢ that proves all steps up to i are correct, using only local information from the last step and current step as shown below. Crucially, it does not trace all the back to step 0, while still being able verify all steps since step 0 are correctly executed.

IVC naturally leads to an elegant solution to the B2G problem.

Concretely, IVC is instantiated as follows:

txid is the red box part, prefix/postfix is everything before/after it, respectively. || is concatenation. 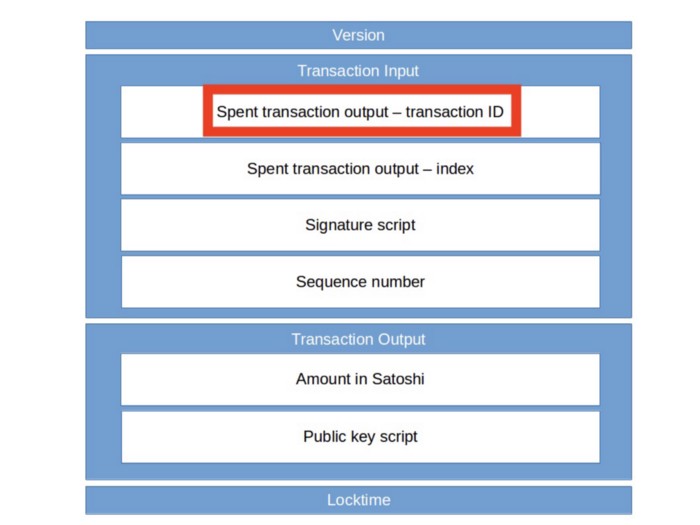 We can now prove a transaction descents from a given transaction by verifying a single short proof regardless of the length of the transaction chain, without tracing all the way back.

Let us construct a simple NFT token using the above approach. An NFT is minted in an issuance transaction, a.k.a., a genesis transaction. For simplicity, let us use only only one input and one output in each transfer transaction³.

When Alice transfers an NFT to Bob, she constructs a transaction with Bob as the receiver and hands it to Bob directly off chain. Thanks to the peer-to-peer nature of Bitcoin, she also sends an SNARK proof along with the transaction. Alice can generate the proof without tracing to the genesis transaction as we explained earlier.

Bob only accepts the NFT if both checks pass:

The proof is of constant size of only a few KBs and can be verified within seconds regardless of the chain length, incurring negligible overhead. The token transfer is effectively instant, just like a regular bitcoin payment.

The most time-consuming part of recursive SNARKs is generating a proof, which can be up to a minute on a resource-constraint device. To enable instant token transfer, a proof can be pre-computed as soon as a token is received by Bob, so it is ready when Bob transfers it to the next owner. In case where Bob needs to send the token to Charlie immediately after receiving it from Alice, he can send the old proof received from Alice and have Charlie verify the last two links in the transaction chain, without generating a new proof as a fallback.

We have implemented the recursive SNARK using snarkyjs as below.

To start, we need to first compile the program to get the verification key. Note that there is no trusted setup.

The genesis method starting from Line 5 is called to generate the initial proof, which simply checks txid0 is the genesis transaction id at Line 9.

The transfer method starting from Line 13 is called to generate a new proof attesting to:

Finally, we can verify a proof against the verification key.

The full code can be found in this Github repo.

We only present a simple NFT example using recursive SNARKs. It can be extended to a directed acyclic graph (DAG), rather than a chain of transactions. It may also be extended to fungible tokens or any other use cases where a user needs to efficiently ensure a transaction can be linked to some ancestor transaction.

We thank nChain for sharing the original idea of applying recursive SNARKs to the B2G problem. We also thank Gregor Mitscha-Baude of O(1) Labs for helping with the SHA256 circuit implementation.

[3] This can be enforced in a smart contract or the SNARK circuit, or both. In the former, we can use the OP_PUSH_TX technique to limit the number of inputs and outputs in all transactions descending from the genesis transaction. For example, we can enforce that any NFT transaction has two inputs and one output. The second input covers transaction fee.

[4] Optionally, the proof verification can be done on chain. It only requires implementing the verifier in the snarkyjs proof system, similar to the Groth16 verifier we have implemented.

How to Start Day Trading Cryptocurrency As A Newbie?