Why is DOGE Going Up

Dogecoin has broken back into the top 10 cryptos by market cap with today’s impulse move. But why is Dogecoin going up? 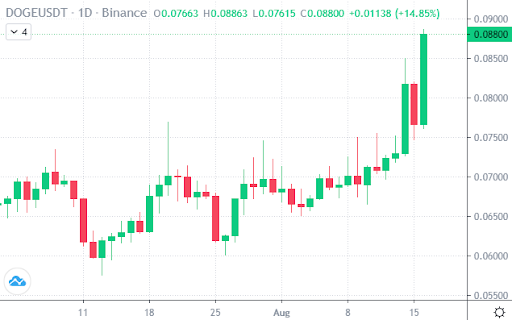 The Dogecoin price now is just under $0.09 at the time of writing, printing a +15% daily candle.

Cryptoassets are a highly volatile unregulated investment product. Your capital is at risk.

Why is Dogecoin Going Up?

Some market commentators speculate that when alts like Dogecoin, Shiba Inu, Litecoin etc. pump that tends to signal the end of a short term market cycle – in this case marking the final phase of a bear market rally.

Meaning that Bitcoin has finished its move to the upside finding resistance as $25,000, Ethereum has stalled at the $2,000 resistance, and some of that money has now tricked down to a few altcoins allowing them to pump, before the entire crypto market cap sees further continuation to the downside, another leg of the macro bearish trend that began in November 2021.

Other traders are optimistic a ‘meme coin season’ or ‘dog crypto summer’ may be possible – similar to the DeFi summer and Metaverse summer bull runs of 2021 – allowing the best meme coins to make a comeback and new ones to also enter the market.

Dogecoin recently completed its Dogecoin Core 1.14.4 upgrade which was a host of technical ‘under the hood’ fixes such as lowering the dust limit and other improvements to its blockchain. Elon Musk also replied to the news of that breaking on Twitter.

Adding to the ‘meme coin summer’ case many recent meme cryptocurrency projects have performed well, selling out their presale early then pumping at ICO or IDO as investors flock to potentially buy the next Dogecoin.

Tamadoge (TAMA) is a play to earn rewards token and the in-game currency of the upcoming Tamadoge Pets game and Battle app.

Players will earn TAMA while battling with their Doge virtual pets, represented as NFTs, combining the appeal of meme coins with an added utility as the native token of a P2E crypto game.

This newest meme coin has so far raised over $4.3 million in its presale which has a hard cap of $19 million.

Find the whitepaper and roadmap here

Their official Telegram has also now passed 25,000 members after releasing details of a $100,000 airdrop.

Dogecoin still has an over $11 billion market capitalization – approaching $12 billion after today’s +15% price move – and its upside potential may be limited.

DOGE would need to flip more successful crypto projects in market cap to rise the ranks of the top 10 coins – including many considered the best cryptos such as Solana and Binance Coin, as well as other popular altcoins Cardano and Ripple (XRP).

Dogecoin is also inflationary with an infinite supply, part of the reason for its retracement over the past year. The Tamadoge whitepaper by contrast lays out how TAMA has a fixed maximum supply and is deflationary, with a 5% token burn on all Tamadoge store transactions when players purchase food and resources for their Tamadoge pet.

This article is sponsored by FINIXIO

$38M In Ethereum Was Just Transferred Onto Coinbase By Benzinga

$38M In Ethereum Was Just Transferred Onto Coinbase By Benzinga