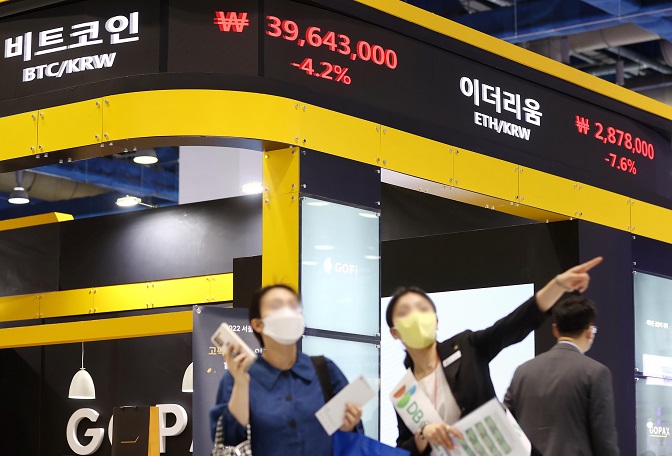 An electronic board at a cryptocurrency exchange in Seoul shows bitcoin being traded at below 40 million won (US$31,014) on May 12, 2022, for the first time since July 27 last year. (Yonhap)

SEOUL, Sept. 27 (Korea Bizwire) — The implosion of the TerraUSD and Luna cryptocurrencies, coupled with the stagnating economy, has resulted in the market for virtual assets shrinking significantly this year.

The Financial Services Commission conducted a survey of 35 virtual asset businesses this year. The market cap was 23 trillion won (US$16.1 billion), down by 58 percent from the previous year.

Their total operating profit was 603.1 billion won, down by 62 percent from late last year (1.64 trillion won).

Daily average transactions were 5.3 trillion won, down by 53 percent from late last year.

Virtual asset holders with assets worth less than 1 million won this year comprised 73 percent (5.05 million) of all users, up by 17 percentage points from late last year (3.13 million).

Another 66 percent (4.55 million) of all users held virtual assets of less than 500,000 won, indicating an overall decrease of the virtual assets held.

Korea Has Seized $182m in Crypto from Tax Delinquents

Korea Has Seized $182m in Crypto from Tax Delinquents