What Bitcoin whales and Binance have in common should concern investors

Bitcoin [BTC] whales seemed to have decided on relegating other stablecoins with their current preference for the Binance stablecoin, BUSD.

According to Mignolet, a CryptoQuant analyst, on 27 September, the cryptocurrency exchange experienced its highest trading volume since June.

According to the analyst, this was due to increased whale activity. Consequently, another noticeable aspect was that the increased trading volume was accompanied by a preference for BUSD by the same whales.

What else is happening on exchanges?

While Mignolet noted that the inflow did not lead to withdrawals, some other movements were witnessed in the overall exchange activity. Based on data from the analytics platform Glassnode, cumulative withdrawals spiked more than usual in the last few days.

Furthermore, the platform showed that while there were 36,154 transfers on 25 September, the investors’ withdrawal count was 55,726 at press time. The implications could mean that many investors were not enthusiastic about a crypto market recovery. 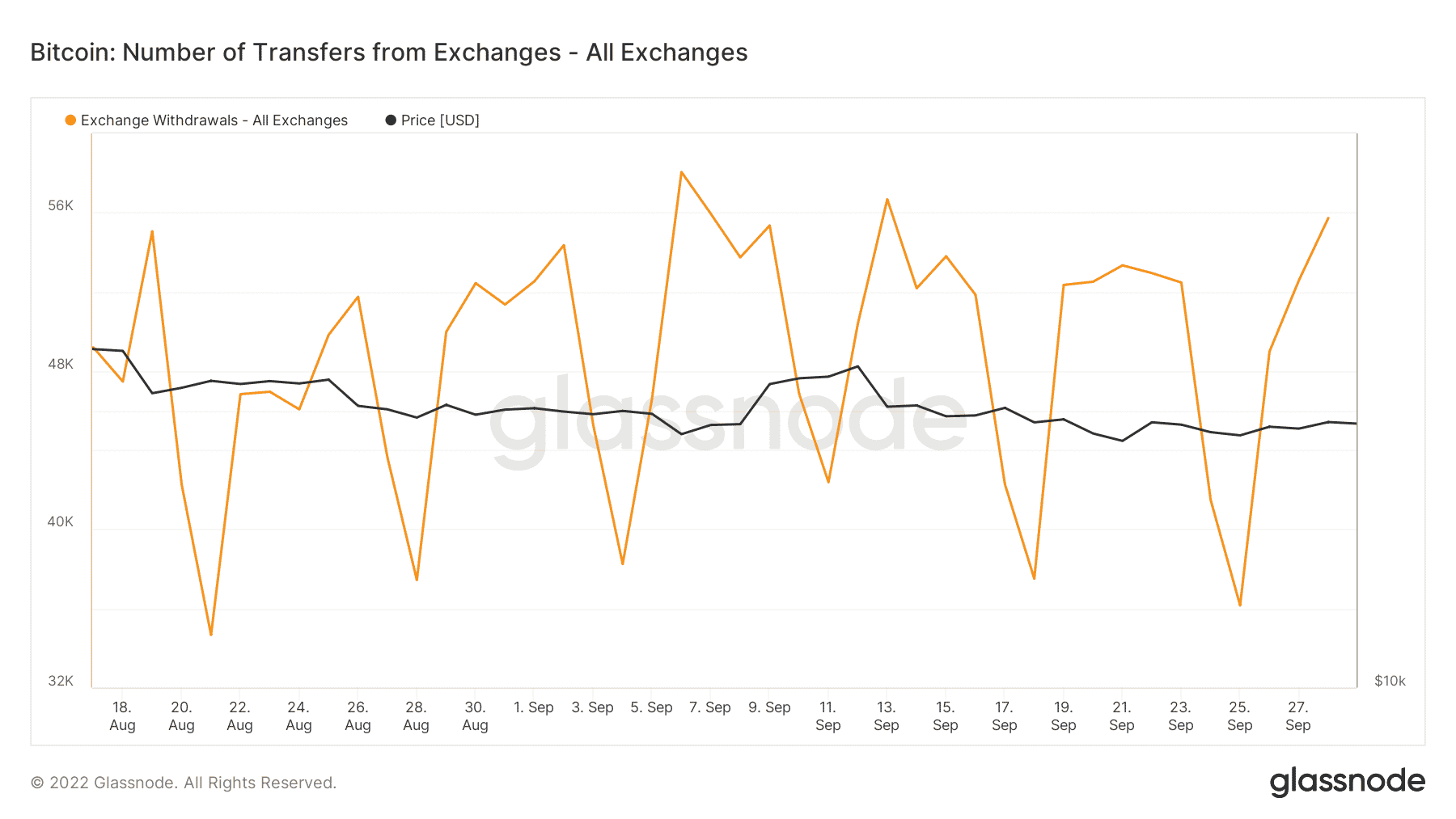 Furthermore, upon considering the inflow part, the number of deposits wasn’t close to the outward transfers. Despite recording over 22,000 deposits two weeks back, the mean exchange inflow had decreased to 19,429.

With the current indications, it could mean that Binance was the only exchange experiencing such an increase. However, it seemed that only the BTC bought with BUSD was getting massive inflows. Emerging reports from Glassnode showed the seven-day outflow volume of BUSD was at an all-time high of 4,840,318.404.

The derivative market is not left out

In another CryptoQuant update, the BTC reserves on the derivative market had increased. This was observed by MAC_D, another analyst on the on-chain data platform.

MAC_D noted that the increase would have also led to increased derivative trading activities. However, there were indications of the BTC price falling or rising depending on what happens in the derivative market. The analyst also said,

Additionally, a look at data from Coinglass revealed that there had been rising liquidations in the futures market. The cryptocurrency futures information platform also showed that over $31 million had liquidated in the last 24 hours.

With the BTC price heading above $19,000, more traders with short positions had suffered the liquidations with $14.32 million compared to the $6.49 million longs.

In light of these updates, it could be in investors’ best interest to subdue the thoughts of a long BTC rally. However, knowing that a switch to consider greens can also be a possible outcome.

Victims of TerraUSD UST Collapse Speak Out – Will Do Kwon Be Arrested?

Victims of TerraUSD UST Collapse Speak Out – Will Do Kwon Be Arrested?