What is Dogecoin? Is it Halal?

The meme era has brought both the wisdom of crowds and mob mentality to the internet. Memes can be so powerful that entire portfolios of stocks and cryptocurrencies can be influenced by meme culture.

Dogecoin is a cryptocurrency that was born from internet meme culture and was largely a playful joke that catered to a surprisingly large niche for most of its existence. That is until the world’s richest man became a devout advocate for it and it reached stratospheric levels of popularity in wider internet culture.

Continue reading for a deep dive into Dogecoin and the Islamic views on it.

Dogecoin is uncommon in the world of popular cryptocurrencies because it doesn’t have a whitepaper. More serious cryptocurrencies such as Bitcoin and Ethereum launch with whitepapers that explain why they were created and the specific technical problems they are trying to solve.

Cryptocurrencies are usually created by developers who want to improve on the infrastructure of the DeFi space and help create the future of the internet.

Dogecoin was launched as an ironic joke in 2013 by software developers Billy Marcus (who worked at IBM) and Jackson Palmer (who worked at Adobe Inc.). The pair became friends through Reddit and collaborated online.

They created a cryptocurrency that was meant to poke fun at Bitcoin culture and the cryptocurrency world at large. They used a meme featuring a Shiba Inu (a breed of dog) that misspelled the word ‘dog’ as the face of their cryptocurrency.

What does Dogecoin do?

Dogecoin is an open-source peer-to-peer payment system. Just like Bitcoin, Dogecoin was created for users to make fast and secure transactions.

Dogecoin is what is known as an ‘inflationary’ coin. Whereas cryptocurrencies like Bitcoin have a ceiling to how many coins can be created (21 million in Bitcoin’s case), there is no limit to the amount of DOGE tokens that can be created. This is part of the reason why even though Dogecoin is in the top ten cryptocurrencies by market capitalisation, each individual coin is worth much less than other coins of similar market cap.

Because of its nature as a meme, Dogecoin’s infrastructure has not been the central focus of the community in spite of having a large base of loyal fans.

How does Dogecoin work technically?

Dogecoin is based on similar technology to Bitcoin.

You can find out more about blockchain technology here.

Blockchain allows users to mine and validate blocks for other users without the need for a central authority. The developers of Dogecoin didn’t take a ‘CEO’ position within the network, as such, Dogecoin is fully maintained by its ardent community which is what makes it so appealing to many.

When a new transaction is requested, a new potential block is created. Miners have to dedicate high CPU computers and electricity to solve cryptographic puzzles. This is then validated by other miners and the block is added to the blockchain. When the majority of nodes validate it, a consensus is reached.

The advantage of this PoW system is that hackers would have to dedicate so much energy and CPU power that the costs outweigh the benefits.

However, the disadvantage of the PoW mechanism is that it is very power hungry, as opposed to Proof-of-Stake which is less energy-intensive.

Dogecoin is also ‘merge-mined’ with Litecoin since it is based on Litecoin. What this means is that it uses the same underlying algorithms and therefore mostly the same miners. This removes a massive barrier for miners to mine Dogecoin as Litecoin miners can very easily also mine DOGE.

Just like Bitcoin, the Dogecoin network is public and permissionless.

This means that anyone can download the relevant software to connect to the network and make cheap and quick transactions. This can all be done without signing up to a central authority or organisation.

Anyone can mine and validate blocks, as long as you have access to the internet.

The Dogecoin code is open-source and can be viewed by anyone to see how it works under the hood. Dogecoin is heavily community-driven and has a thriving network of people willing to advocate for it.

What are the use cases of Dogecoin?

Just like Bitcoin, Dogecoin allows users to transact with one another using the DOGE token.

Dogecoin’s primary use therefore is as a currency for instant transactions. Users can send and receive DOGE using their Dogecoin wallets instantly whilst retaining minimal transaction fees. Dogecoin is ideal for microtransactions across the internet such as supporting content creators online.

It is also noteworthy that a number of businesses both small and large are gradually beginning to accept Dogecoin as payment due its fast transaction speed, near-zero fees, and unlimited supply.

There are around 4 million holders of Dogecoin currently, though 0.01% of holders own 82% of the supply of DOGE tokens. Nevertheless, Dogecoin has one of the most active communities in the crypto space due to being a meme and being supported by Elon Musk.

The world’s richest man began tweeting publicly in support of the currency early in 2021 and is now an integral part of the Dogecoin community. Musk also boosted the Dogecoin price by allowing Tesla owners to pay in Dogecoin to recharge their cars as well as Tesla and SpaceX merchandise.

Other businesses that accept Dogecoin as payment include:

Due to its thriving community, Dogecoin regularly makes headlines such as in 2014 when the Jamaican national bobsled team crowdfunding through Dogecoin to make it to the Winter Olympics.

This is a very small number of transactions compared to Ethereum’s 40 million transactions in a month and Solana’s 1.5 billion. Because Dogecoin can mostly be used for microtransactions and isn’t integral to the DeFi and Web 3.0 space, there isn’t as much incentive to use it compared to the smart contract crypto currencies such as Ethereum and Solana.

What are the strengths and weaknesses of Dogecoin?

Is Dogecoin a good investment?

It is very important to remember that Dogecoin was created as an inflationary coin so that there is no limit to how many DOGE tokens can be mined. This means that DOGE has no scarcity and there is an endless supply.

Because of this, even though it is the 10th biggest cryptocurrency by market capitalisation, Dogecoin is currently only worth $0.08 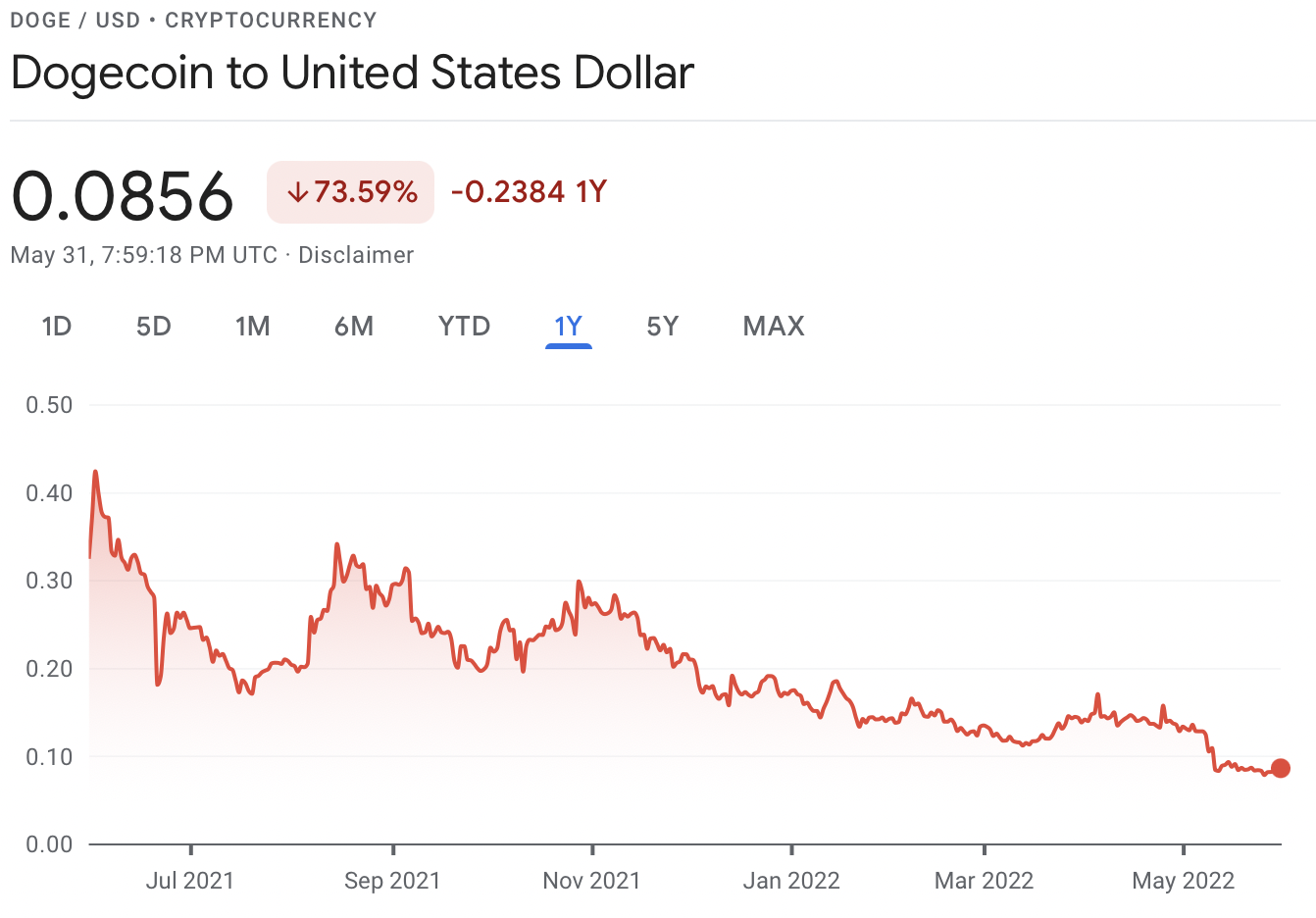 In the past year, Dogecoin has steadily depreciated by almost 74%, although taking a 5-year outlook shows an appreciation of 404%. However, a lot of Dogecoin’s value is simply due to free PR and its price mostly increased after Elon Musk announced his support. 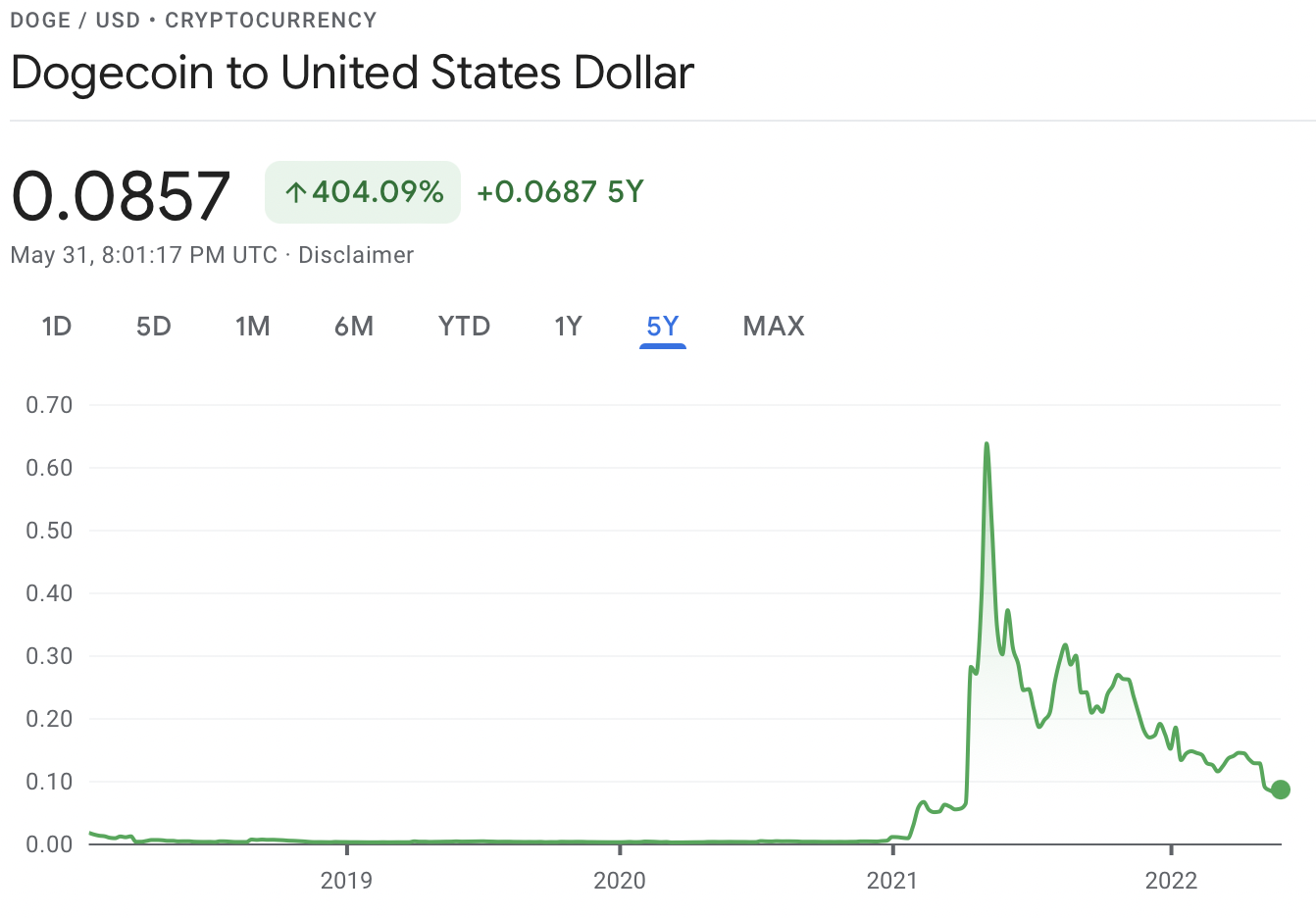 As you can see from the above chart, Dogecoin peaked in mid-2021 after Elon Musk’s public support. But it rapidly fell back down from those heights as many investors took profits and sold their DOGE.

We’ve written a whole guide on how to invest in crypto the Islamic way, check that out for a good walkthrough on how to actually begin investing.

Because it is in the top 10 cryptocurrencies, Dogecoin is available to trade in all major crypto exchanges from Coinbase to Binance.

Now, is Dogecoin actually worth investing in?

There are two sides to this argument.

The advocates are fully tuned into the community and think businesses will adopt Dogecoin increasingly as an option for cryptocurrency payments due to its simplicity, speed, and near-zero fees. Advocates also argue that it has the support of the likes of Elon Musk.

However, the opposing argument to this is that you have an entire cryptocurrency at the mercy of memes and virality. An investment should have something unique to it that produces value, and should not merely move according to the whims of a public PR machine in the long-term.

Another factor to consider is that due to its inflationary and unlimited supply, there is no scarcity to Dogecoin like Bitcoin has. This makes it much less valuable because people can just keep mining more DOGE and lowering its value. Because of this, each individual DOGE token isn’t worth much and Dogecoin has not seen an appreciation like other cryptocurrencies in the top 10.

If, after your due diligence, you decide to invest in Dogecoin, be weary that because it does not propose anything unique and is mostly based on meme culture, it brings with it incredible volatility even in the crypto world.

It doesn’t help that a few large investors hold most of Dogecoin, so if they decide to sell, the value of DOGE plummets heavily.

There are various alternatives to Dogecoin. Since it is based indirectly on Bitcoin and doesn’t propose anything unique, its alternatives has many features that Dogecoin does not.

The original cryptocurrency that started it all off probably makes a much better investment overall because of its 44% market dominance and its being synonymous with cryptocurrency.

Bitcoin has the advantage of having a limited supply of 21 million coins which gives it some scarcity. Bitcoin also has more acceptance for payments amongst businesses, with more than 2,000 US businesses accepting Bitcoin.

As a long-term investment, Bitcoin has the upper hand.

Dogecoin is based on Litecoin.

Litecoin was released in 2011 and has faster transaction speeds and mining times than Bitcoin. It holds the 19th spot with a market capitalisation of around $5 billion. Unlike dogecoin, Litecoin has a ceiling to its supply which makes it more scarce, resulting in a price per coin of $68.

The essence of the debate on whether cryptocurrencies are halal comes down to whether they are ‘Māl’ as we have explained previously. Māl is something that can be acquired, whether it be an item or a service.

There are three stances on cryptocurrencies today:

Proponents of view (1) argue that cryptocurrencies are not Sharia-compliant since they have no intrinsic value and are merely entries on a digital ledger.

Our view has always been that (1) does not seem right since cryptocurrencies have value as millions of people are willing to buy, hold, and trade them. They are just as real as fiat currency today which mostly exists in the spreadsheets of banks. Our monetary system became predominantly digital a while ago.

View (2) seems to be the most realistic view, as cryptocurrencies are a new and emerging technology that are yet to mature into fully fledged currencies used by economies at large. However, in practice, there is no real difference for casual users between (2) and (3) since they both consider trading cryptocurrencies to be permissible.

Dogecoin has entered meme culture rapidly, with the Shiba Inu dog a household icon on Twitter. Given its virality, Dogecoin has ascended to the top 10 cryptocurrencies with zealous fans comprising a surprisingly large community.

This of course does not mean it is worth investing in or that it will become the cryptocurrency of the future as its advocates claim. Dogecoin does have advantages in mining and transaction speeds for microtransactions. Combined with its community Dogecoin may continue to reside amongst the largest cryptocurrencies.

Dogecoin is mainly competing in the space of transactions with cryptocurrencies like Bitcoin. It cannot compete with the likes of Ethereum and Solana that have smart contract technology and allow developers to build decentralised applications. It is not a contender for the future of internet infrastructure.

A good place to start dabbling in crypto as a Muslim is to read our Complete Crypto Guide for Muslims.