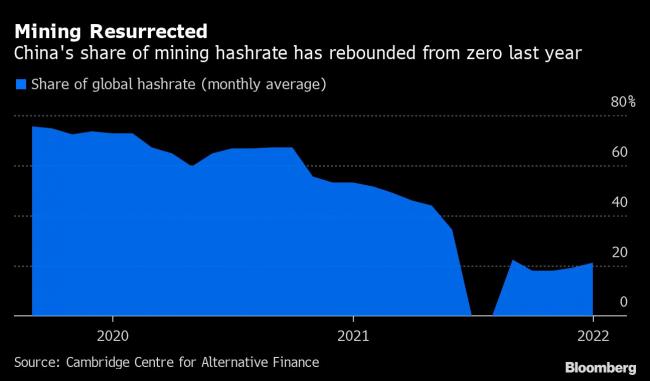 (Bloomberg) — This summer, word started spreading over Chinese social media about a conference in Dali, a city nestled among 4,000-meter (13,100-foot) peaks in the country’s southwest.

The organizers expected fewer than 200 attendees, but ended up selling out the 1,000-person venue only to see more than double that number ultimately show up for the August event. The topic of the gathering: crypto, the sector China’s government declared largely illegal a year ago.

Before the clampdown, China was emerging as the epicenter of the crypto world, spawning giant exchanges like Binance Holdings Ltd. and the biggest mining firms. Beijing’s move to banish cryptocurrency trading and mining, announced in September 2021, seemed poised to snuff out the entire domestic industry.

That’s not exactly how things turned out. Instead, what’s emerged is a mix of companies that hew to the Communist Party’s agenda promoting state-sanctioned blockchains and the digital yuan; some rogue Bitcoin miners; and crypto entrepreneurs trying to expand their fledgling firms without crossing any perceived red lines.

How China ends up treating the crypto sector’s remnants will have big ramifications because digital assets ranging from Bitcoin to nonfungible tokens are at the heart of what proponents like venture capitalist Marc Andreessen refer to as web3, or the next iteration of today’s internet.

China has “three red lines: crypto trading, over-the-counter transactions, and mining,” said Jason Kam, founder of Folius Ventures, an investment fund focused on Asian crypto startups. “At its core, the Chinese government is going to dampen speculation and capital outflow, but for the remainder of web3, such as developers writing code, the government has a ‘one eye open, one eye closed’ approach.”

China’s decision in the 1990s to erect the Great Firewall gave the CCP unprecedented power to restrict the free flow of information online and set the stage for an internet industry from which Western companies like Alphabet (NASDAQ:) Inc.’s Google and Twitter Inc (NYSE:) are largely shut out. The fear among many of China’s remaining crypto entrepreneurs is that the government will take a similar approach to Web3, stifling innovation and keeping internet users isolated from the rest of the world.

Interviews with more than a dozen industry participants based in China, ranging from founders to programmers and operations specialists, paint a picture of a sector trying to find its path by experimenting with new products and services in the hope that regulators won’t crack down. They all asked not to be identified for fear of inviting government scrutiny.

Researchers at Chainalysis Inc. tracking crypto adoption worldwide earlier this year noticed a surprising phenomenon: China was actually gaining ground on other nations, to such an extent that it placed 10th in Chainalysis’ latest global crypto adoption index, up from 13th in 2021. “Our data suggests that the ban has either been ineffective or loosely enforced,” they wrote.

“There are informal crypto markets that are operating in kind of a legal gray area,” said Kim Grauer, director of research at Chainalysis. “We’ve talked with merchants who are in Sub-Saharan Africa and Latin America who are purchasing goods from China, using cryptocurrency in this informal market capacity. We can see people within China are still visiting major centralized exchanges.”

For a stretch of the industry’s brief history, China was a crypto powerhouse. As recently as 2017, it was home to the world’s three biggest cryptocurrency exchanges — Huobi, Binance, and OKX, collectively known as HBO. At its peak, the country was estimated to account for roughly three-quarters of the world’s Bitcoin mining capacity. Cheap labor and sophisticated supply chains gave mining-rig giants Bitmain Technologies Ltd. and Canaan Inc. a head start on Western rivals.

Such was China’s gravitational pull that crypto entrepreneurs ranging from co-founder Vitalik Buterin to FTX’s Sam Bankman-Fried flew there to seek funding for their nascent enterprises.

“China had always been one of the hot spot countries to stop at for any project that wanted to grow and strive for adoption,” said Edith Yeung, general partner at Race Capital, an early investor in FTX.

But China also has an uneasy relationship with rampant speculation, with the inevitable busts seen as a potential threat to the CCP’s hold on power. And few asset classes are as susceptible to speculative manias as cryptocurrencies. Officials were also concerned about money laundering and hard-to-track currency outflows.

The final reckoning came in 2021. In May that year, a regulatory body led by Vice Premier Liu He called for a full-scale clampdown on crypto mining and trading. Then, on Sept. 24, authorities outlawed all cryptocurrency transactions and pledged to completely root out mining.

“Crypto transactions and crypto services of all kind are banned in China. No room for discussion. No gray area,” Henri Arslanian, at the time crypto leader and partner at PwC, declared on Twitter.

By then, Binance had already moved operations elsewhere. Two months later, Huobi would announce plans to relocate to Singapore and vow to sever ties with all users based in China (co-founder Leon Li recently sold his controlling stake). A large number of smaller crypto outfits also decamped.

But even amid the carnage, widespread enthusiasm for digital assets remained.

As entrepreneurs, college students and current and former workers at China’s big tech companies descended on Dali in August for the crypto conference, Covid restrictions made a central location impractical. So attendees joined impromptu panels in bars and restaurants scattered around the city over three days.

Local officials were enthusiastic about hosting a conference on topics like the metaverse, said one of the organizers, who asked to be identified only by his first name Kai due to the sensitivity of the matter. Even so, organizers took care to toe the line, avoiding soliciting sponsorships from crypto miners and centralized exchanges, Kai said.

At that conference, just like at a much smaller gathering in Beijing in September, discussions tended to center on web3, envisioned as a more decentralized version of today’s internet built around blockchains — the digital ledgers underpinning much of crypto. And more specifically: What areas within web3 are safe to pursue, given China’s restrictions?

Web3, as described by protagonists, involves things the CCP approves of (blockchains) and frowns upon (cryptocurrencies like Bitcoin and Ether). It also features NFTs, the certificates of digital ownership that China’s government has embraced, at least partially.

How China Is Embracing NFTs, With Strings Attached: QuickTake

The ambiguity toward NFTs — for example, it’s fine to create and sell them, but trading them on secondary markets and using cryptocurrencies for settlement is banned — is in part what drove Frank Chen, 26, to leave his job as a product manager at Tencent Holdings (OTC:) Ltd. and found a project called Strxngers.

In August, Strxngers released its first batch of NFTs resembling pixellated 80s-style computer game avatars. They sold out in seconds, according to Chen.

“I picked NFT as an area to experiment within China because I don’t think the country is completely against it,” said Chen. “Before any regulation on digital collectibles comes out, there’s a currently gray area that allows people to experiment.”

There are signs, however, that even NFTs make authorities uneasy. In April, China’s banking, securities and internet finance associations warned of financial risks associated with such assets and barred industry members from providing trading venues or financing for them.

Even in areas the government has unambiguously declared illegal, enforcement has at times proved challenging. The most recent data from the Cambridge Center for Alternative Finance show miners in China still accounted for 21% of global mining capacity as of January, months after the ban. Cambridge in May said the resurgence indicates “significant underground mining activity” in China.

The Chinese government hasn’t yet adopted a comprehensive official stance on web3. But at a conference in Shanghai in early September, Zhang Ping, a member of the Chinese Academy of Engineering, said that as currently envisaged, web3 poses a threat to China’s strategic interests.

Instead, Zhang proposed a “permission-based” version of web3 tailored to the country’s own needs, featuring stablecoins pegged to the yuan and issued by commercial banks.

If anyone could be said to be the face of the CCP’s preferred version of web3, it may be He Yifan, the chief executive of Beijing-based Red Date Technology. The company operates a hub of sorts for developers to build applications for everything from NFT transactions to drug-delivery tracing – all running on permission-based blockchains under state oversight.

Unlike on a traditional blockchain like Ethereum, transaction costs are denominated in fiat currency and fixed at 0.05 yuan per transaction. Daily transactions on Red Date’s Blockchain-based Service Network have surged to over 1 million, according to He, comparable with volumes on Ethereum.

“Crypto is about trading and applications, and we are all about the tech infrastructure,” He said. “Two entirely different worlds.”

With the government looking poised to favor the latter of those worlds, the mood at the Dali conference was one of mixed feelings: optimism about the business opportunities web3 presents for Chinese developers, and pessimism about China’s place in it, said Kai, the organizer.

“China is missing out on how the future of internet will be structured,” said Yeung of Race Capital.