The testing version is mainly focused on the node smart contract execution. It is divided into two phases to ensure the block minting time accuracy and whole node staking protocol, which includes node reserve contract.

1st phase (Node name: Early bird) — At this initial testing phase, the first 100,000 smart custodial Eurus blockchain addresses are limited to the participants. The objective for this stage is not only to monitor the mentioned block minting accuracy and node staking protocol execution but also targeting to collect the wallet UX feedback from users. There is no EUN staking quantity requirement, it is absent of node representative, and no node tips are attached.

2nd phase (Node name: Pre-launching) — During this testing period, Eurus focuses on the staking protocol and the node reserve smart contract execution accuracy. The testing result will be elevated and finalized to the official node stake version. All kinds of Ethereum addresses are welcome to be tested via import wallet addresses or create a new one by Eurus Wallet. Participants can get EUN at the asset page and then stake to this node to gain a validated block reward. Like the early bird node, it is absent of node representative and no node tips are attached. 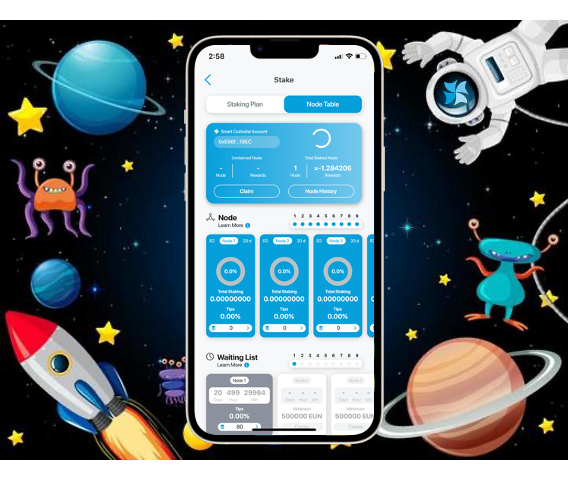 During the beta testing period, no gas fee is required to get EUN or node staking. Eurus also launching a referral scheme for its existing users to invite their friends to be part of testing.

There are nine public nodes for EUN hodlers among 21 nodes. Each public node has an 8 million-EUN staking capacity. Once the public node’s representative is occupied, it will open to the public to stake. They can set the node name and node tips according to their preference. Every node shares the block reward evenly.

As node representatives suggest the change of network and the other EUN hodlers can vote on those suggestions to realize the DAO blockchain network. Therefore, the representative must qualify by PPoC, which is according to their contribution to the network.

The block reward will be halved by every 63 million blocks, estimated for about four years. After the Eurus mainnet was deployed, over 20 million EUN was already minted and stored in the node reserve smart contract. Eurus will implement a discussion with node representatives and take suggestions for letting EUN hodlers vote for the reserve arrangement. The voting discussion meeting is scheduled after the launch of the official node stake.

A referral scheme and influencer incentive program are launching along with the node testing period.

Eurus is a layer-1 blockchain that uses a proof-of-authority consensus mechanism. It is an open-source blockchain protocol based on Hyperledger technology with industry-leading cross-chain transaction speed and a flexible network. Our interoperability architecture is one of the most critical infrastructures to reach a prosperous future in the blockchain industry.

The purpose of Eurus, a cross-chain solution, is to solve the other layer-1 blockchain, which faced slow transaction speed and fluctuating gas fees.

To learn more about the Eurus project, please visit its website.

This publication is sponsored. Cointelegraph does not endorse and is not responsible for or liable for any content, accuracy, quality, advertising, products, or other materials on this page. Readers should do their own research before taking any actions related to the company. Cointelegraph is not responsible, directly or indirectly, for any damage or loss caused or alleged to be caused by or in connection with the use of or reliance on any content, goods, or services mentioned in the press release.