As one of the core businesses of DeFi, liquidity mining, has been sought after by the market since its appearance on the Ethereum Blockchain, not only promoting the development of DEX, but also allowing many investors to benefit from it. With the increasing number of pools, the whole Ethereum ecology is also growing, but the threshold of participation in mining is also increasing, with a wide range of mining pools, cumbersome operations and more gas fees, which discourage some ordinary investors. So revenue aggregators came into being, and yearn.finance, as a leading company, has simplified the mining process and improved the mining revenue through Vault, and achieved remarkable results in a very short period of time. The success of Ethereum has also promoted the rapid development of other public blockchains, and a large number of liquid mining pools have appeared on each public blockchain, and mining revenue aggregators have also been launched one after another. However, most aggregators are only capable of single-chain mining, and due to the limitations of mining strategies and technologies, as well as the current bear market, users’ revenue are not optimistic.

The four features of MYC are in the following：

No further tedious operation, users just deposit stablecoin into the protocol, and the platform will gather investors’ common funds and put them into high-yield mining pools all over the network, so as to maximize the capital utilization rate through high-frequency operation to gain revenue.

MYC switches between different protocols and mining pools, and the Gas fees consumed by invoking these contracts are shared by users, saving up to 80% of transaction fees

MYC currently supports BSC and ETH, next will support Polygon, AVAX, MEDX and other EVM chains. In the future it will also realize the cross-chain non-EVM chain

The platform will carry out asset allocation, mainly conservative, and supplemented by stable, and will also use part of the funds to do radical investment to improve user benefits, both spot mining and leveraged mining. 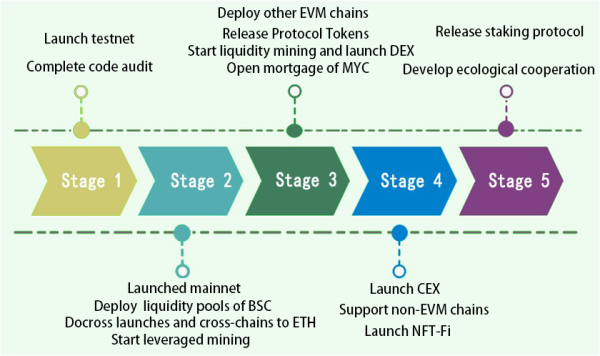 MYC token economics: total issuance of 100 million, 12% for the foundation, 8% for the team, 30% for marketing, and 40% for liquidity mining. The token use mainly includes agreement governance, promotion rewards, liquidity mining, Mortgage Loans, etc.

In terms of marketing, MYC mainly uses Twitter, Telegraph and Discord as the official information release platform for the project. For community members who promote the project, they will have greater rewards, so as to increase the visibility of the project and allow more users to benefit from the MYC platform.

In the future, MYC will continue to launch new products, expand its business scope, and always develop in the blockchain field, uphold the principle of user first., and share the dividends of the times.

Why are MetaCryp, Solana, and Polygon the Three Coins Tipped for Success by Analysts?