The initial designs of the new commemorative coin collection from the Royal Mint with designs celebrating the 25th anniversary of Harry Potter and the Philosopher’s Stone have been debuted to the public. What’s being called a “sparkling and spellbinding” collection by the Royal Mint was inspired by the illustrations of Jim Kay.

The first of four coin designs ranging from half-ounce to two-ounce in size will feature the face of a young Harry on one side of the coin with the effigy of Her Late Majesty Queen Elizabeth II on the other. Buyers will also have the option to chose from either silver or gold proof coins within the size range. Of the many varieties available for purchase, one exclusive design within the collection will feature a colored version of Harry with his trademark black hair and rounded glasses on a silver background. 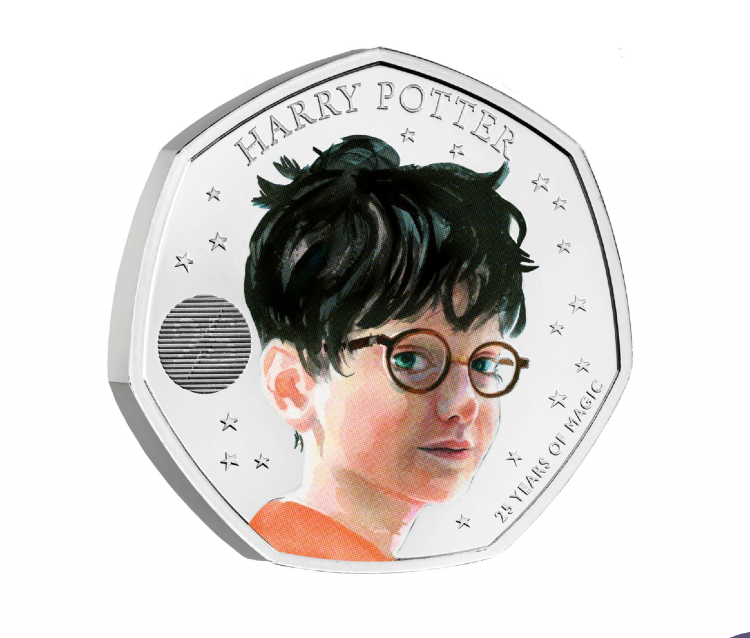 A unique feature of the Harry Potter commemorative collection is that coins will not only portray the effigy of Her Late Majesty Queen Elizabeth II but, starting on January 1, the effigy of His Majesty King Charles III will be minted on currency moving forward. According to the Royal Mint, “this means that the Harry Potter collection is one of a small number that will see a change of effigy during the series.”

All coins portraying Harry from this collection are on sale, but supplies are limited for each version and expected to sell out quickly. Prices for each coin type range from £11.00 (US $12.43) to £5,215.00 (US $5,895.30), depending on the buyer’s choice of size and metal type. Be sure to check back for the latest information about the Royal Mint’s Harry Potter coin collection.

Did you know that MuggleNet is 99% volunteer-run? With your monthly pledge of $5, you can provide monetary support to our volunteers while becoming eligible for exclusive swag giveaways!

Support us on Patreon

How to do mobile cryptocurrency mining?